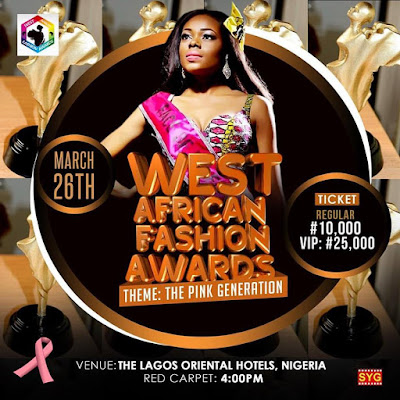 The 2016 West Africa Fashion Awards Ceremony will be held on Saturday March 26, 2016 at the Prestigious,  Oriental Hotels, Lagos,  located at 3 Lekki - Epe Express Way, Lagos.  the ceremony honours the most forward-thinking designers, models and plain ol' good dressers who have made    an impact across the pond.
The "West Africa Fashion award" is a ceremony to be held annually in the West Africa to showcase West African designers and present awards to those who have made the most outstanding contributions to the fashion industry during the year.

The main awards include that of Menswear Designer , womenwear Designer, Fashion Event of the year, Style award and Outstanding Contribution as well as awards to the 'most-fashionable' celebrities in various fields. The ceremony is organized by the Fashion Instinct and runs as part of West Africa Style Week each March

This fashionable affair starts at 4:00PM with red carpet arrivals, the VIP reception and media opportunities. Guests will be seated at 5:30PM, and the awards show begins promptly at 6:00PM.

2016 Recipients will be awarded in the following categories:

The West Africa Fashion Awards  is Powered by Fashion Instinct